Small, yet fast and powerful: Mini PCs don’t take up much space on the desk and often come with a good set of features. If you don’t want to buy a large desktop computer or a notebook, you should take a look at the Mini PC range.

Here you don’t have to dig deep into your pocket, because the mini computers are already available for little money. We make a comparison of current models, so that the decision is a little easier for you in the end. We also answer the most important questions about the small PCs.

Mini PC Test: The best Mini Computers in the overview

Small PCs are a dime a dozen and are aimed at different user groups depending on the equipment. Some have just enough hardware built in, while others could almost pass for desktop PC replacements. In our comparison of four systems, there should be something for everyone – and they’re cheap, too. 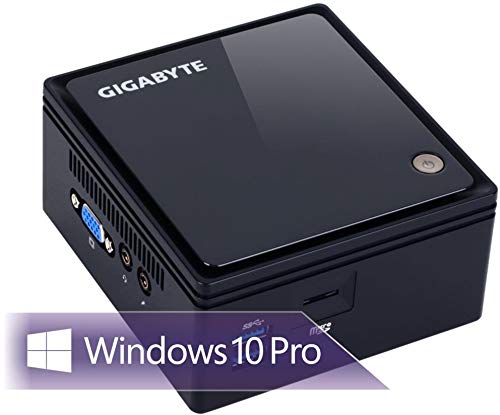 shinobee Silent Mini PC BRIX NUC 6-Watt Office,
We start with the mini PC from ACEPC, which is available in three different versions. The versions each have more or less working and fixed memory. Probably the best of the three versions is the middle one, where the price-performance ratio is really impressive.

The ACEPC Mini-PC is equipped with an Intel Celeron J3455 processor, which has 6 GB RAM and an internal capacity of 64 GB (eMMC) in this configuration. As is often the case, the memory can be expanded via a microSD card - or a classic hard drive in a 2.5-inch format can be installed, which is available in the case.

Two displays can be connected via the two HDMI outputs. Furthermore, three USB ports are available, as well as a LAN port and a headphone jack. WLAN and Bluetooth are of course also possible. The dimensions of the small PC amount to just 14 x 14 x 5 cm, so it is quite handy.
999,00 EUR
Buy on Amazon » 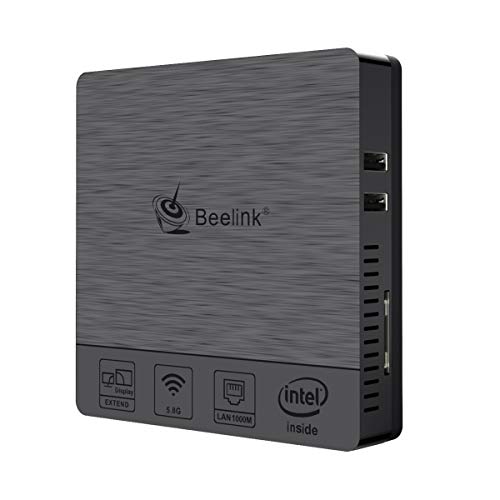 Beelink BT3Pro Mini PC Multi Media Desktop PC
The Beelink BT3Pro weighs just 248 grams and with a width of 12 cm really fits on any desk. Inside the mini PC works an Intel Atom Z8350, there are also 4 GB of RAM and 64 GB of storage space available. Windows 10 is preinstalled on the mini computer.

If you want even more performance, you have to opt for the more expensive version with 8 GB of RAM, 256 GB of storage and a stronger processor. The storage can be expanded via a microSD card in all variants. Displays can be connected to the Beelink BT3Pro via HDMI and even VGA.

The maximum supported resolution for HDMI is 4K, but a second HDMI port is not available. Keyboard, mouse and other devices are connected via USB. Four USB ports are available here. Bluetooth is also supported by the small PC.
Buy on Amazon » 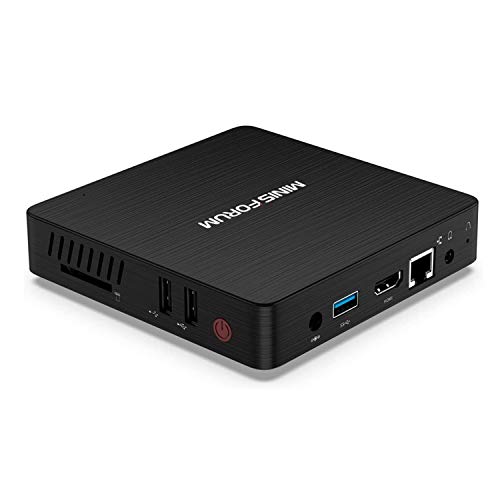 Upgraded Z83-F Mini PC Computer
As the third candidate in our comparison we have the MINIS FORUM Mini PC, which can also be ordered in various configurations. In one of the versions, there is the Intel x5-Z8350 processor at its heart, it is supported by 4 GB of RAM and an internal storage capacity of 64 GB, which is of course expandable.

Windows 10 is already pre-installed on the MINIS FORUM mini PC. In terms of connections, you can connect a monitor via HDMI. Beyond that, there is an older VGA port as well as three USB ports and a LAN port. The Mini PC also knows how to communicate via WLAN and Bluetooth.

Displays can be controlled with up to 4K resolution. One of the special features here is that no active fans are used despite the high resolution. When working or surfing, the MINIS FORUM Mini PC stays correspondingly cool and does not emit any sound. A rotating hard drive is also dispensed with in favor of flash memory.
139,99 EUR
Buy on Amazon » 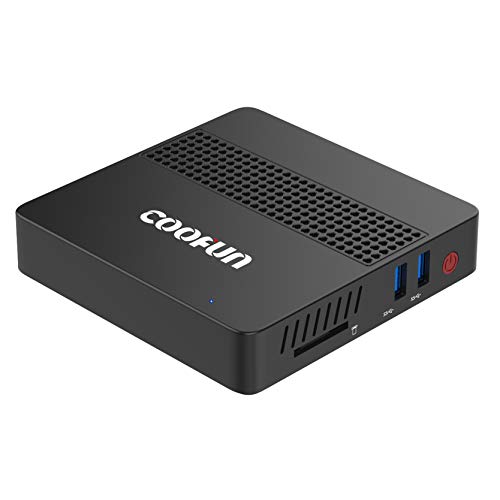 Of the Mini PCs presented, this one comes closest to a desktop replacement, as it comes with 6 GB RAM and expandable 128 GB ROM. The hard drive is a normal SSD, which can be replaced with a larger one if necessary. Windows 10 is already preinstalled on the computer in the Pro version. Nevertheless, the weight is very reasonable: The small PC weighs just 300 grams.

Three USB ports are available to connect a keyboard, mouse and other peripherals to the device. Two displays can be connected to the computer via HDMI and VGA, and the manufacturer has also thought of a port for headphones in 3.5 mm format.
Buy on Amazon »

MINI PC Guide: Everything you need to know

Mini PCs are basically almost full-fledged computers, but when choosing one, you should think carefully about which model it should be. In the following we answer the most important questions about the Mini Computer.

What is a MINI PC and what are the advantages?

What a mini computer is, the name actually already reveals itself: It is a computer that is much smaller than conventional desktop systems. Notebooks or netbooks are also larger and usually heavier than the small PCs. They fit on even the smallest desk and take up hardly any space.

The small size and the also low weight are probably the biggest advantages of a Mini PC. The small computer is easy to transport – although of course you also have to think about the peripherals like mouse and keyboard. A display must also be connected to the Mini PC, plus cables and possibly other devices such as an external hard drive to expand the Mini PC’s capacity.

The small computers can also be used as servers for the home. They are designed to be power-efficient and, given enough storage space, can be used to store movies and music centrally. The content may then be accessed from a notebook located in another room – and at the same time from a desktop PC, which does not have to be in the same room either.

How does a Mini PC work?

A Mini PC works just like any other computer, except that it is much smaller. So there’s a motherboard, processor, memory, hard drive, and lots of ports for peripherals. A display is not part of the package, nor is a mouse and keyboard. They have to be purchased and connected separately.

Due to their small size, Mini PCs do not use a dedicated graphics card. Instead, the graphics are provided by the mainboard and the processor. But that also means that complex games with small PCs are rather out of the question.

How much will a mini computer cost me?

Since they are not high-end computers, Mini PCs are in any case cheaper than a desktop computer or a comparable notebook. The prices start at a little more than 100 $ and are basically open upwards. At around 400 $, however, we get into a range where it is sometimes more worthwhile to buy a notebook or a large computer.

In any case, there will be additional costs for display, mouse and keyboard, if you don’t already own these devices. A memory expansion via micro SD card can also be worthwhile under certain circumstances, since you don’t have to dig very deep into your pocket for SD cards.

What should I consider when buying a Mini PC?

Above all, it is important to be aware of what the small PC is supposed to do before buying it. If gaming is on the agenda, then you should rather keep your hands off it. If the costs play a large role, then it looks already different. No notebook and no PC comes for so little money on such a high performance.

Nevertheless, you should not necessarily buy the cheapest device. As is so often the case, the truth lies in the middle.

You should also pay attention to the connections of the Mini PC before buying. If multiple displays are to be connected, two HDMI or VGA connections must also be available accordingly. The number of USB ports should also not be taken lightly, as two of these ports are already occupied by the mouse and keyboard alone.

If, for example, an external hard disk is added via USB, all connections are quickly blocked. After all, there is still Bluetooth, for example, to connect the mobile phone or tablet with the Mini PC.

Mini PC test: Our conclusion on the small computers

Small, powerful computers for little money – what could go wrong? One thing is certain: cheap does not always mean good. If your Mini PC is the only computer you own, you should stay away from the cheapest offers. To really pass as a possible replacement for a desktop PC, you have to dig a little deeper into your pocket. The investment is then much more worthwhile.

Mini PCs are especially interesting when the money for a “real” computer is not enough – and when you can do without gaming. They are often powerful enough for a 4K resolution (assuming a corresponding display), but do not have a separate graphics unit on board.